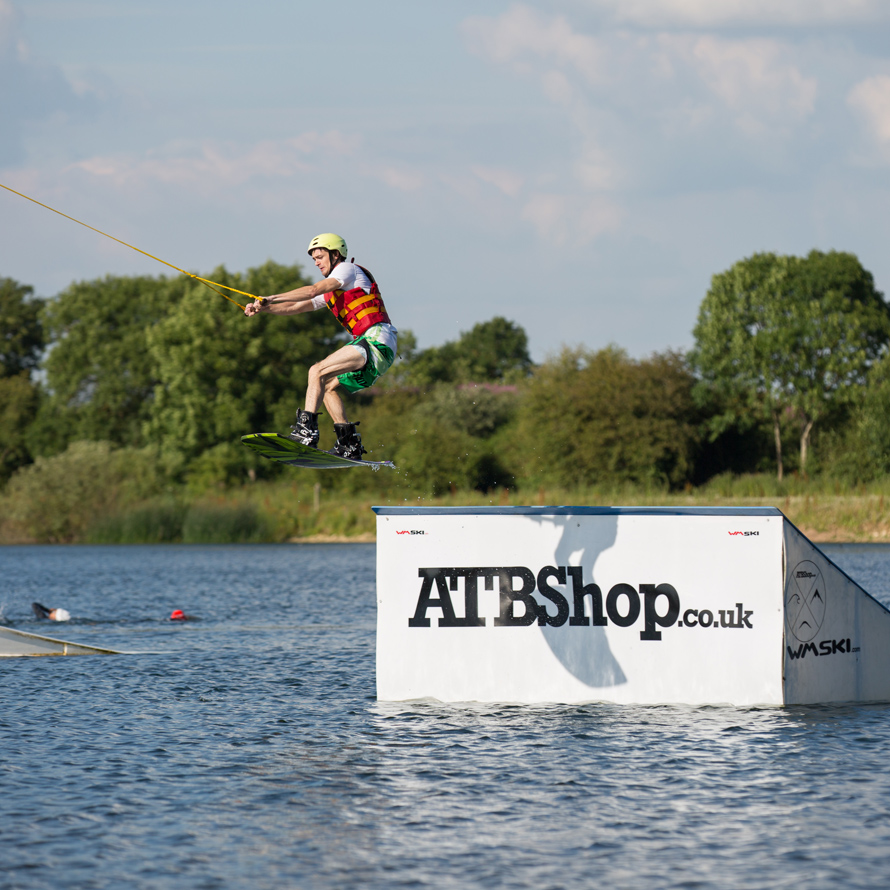 This series takes a look into learning to wakeboard at WMSki on their System 2.0 cable. If you have any questions or would like us to cover anything specific then please drop us a message in the comments below. If you missed the second session in this series then you can jump to it here.

After just two sessions on WMSki’s System 2.0 cable I’ve got all the basics nailed & feeling confident on the board. I never thought I would have progressed this quickly, I believe a huge part of the speed of progression is thanks to the System 2.0. Not having to take the board off & walk back to the dock every time I bailed certainly helped speed things up!

This weeks session kicked off with another dock start although this time rather than being sat on the edge of the dock, I was stood on top of it (the dock is only a few feet above the water). Starting from the dock is a fairly simple process, as the cable begins to pull you just jump forward landing on your heels & then continue as normal. As you can see from the photo below, I didn’t get the start on the first attempt but the second time around I managed to nail it!

To my surprise, this session was all about learning to hit kickers. I had no idea I had progressed enough at this point to start hitting them! The instructor at WMSki began by talking me through the whole process. Whereas with the corners I began edging out very early this time with the kickers, I’d only begin to edge towards them as I got close. I would then straighten up the board, bend my knees & put my weight on the balls of my feet and then hit the ramp. On landing I would use my knees to soften the impact and ride away clean (or at least that was the plan).

I am comfortable riding kickers on a snowboard so I already had a good idea of what to expect, falling off into water was going to be a lot softer than snow as well. First off all I’d be hitting the wedge at the back of the lake, this is the lowest of all the kickers at WMSki and is only around 3-4ft high. As I had expected, the landing on my first go didn’t quiet work out but I managed to get them down after that. I had a few runs on the wedge, getting more comfortable each time I hit it.

I was then in for a surprise; I was going to hit the ATBShop kicker so my colleague could get some shots just for this entry in Learning To Wakeboard! The ATBShop is around 5ft or so high and unlike the wedge I’d be riding it actually has a kick to it! The WMSki instructor told me to hit it just the same as I’d hit the wedge but I could use my knees to soften the impact of the kicker until I was comfortable with it.

Riding down the lake to hit the kicker, I was feeling rather timid. From behind the kicker just looked like a big blue wall until I got close & I couldn’t see anything the other side. I must admit on my first attempt, I bailed & made a quick turn away from the ramp! Now with everyone cheering me on, I went back up the lake ready to go for real. Hitting the kicker was just like WMSki instructor had said & I could certainly feel the ‘kick’ in the kicker compared to the wedge I’d been riding previously. We got the shot my colleague needed & I did sort of land of my first attempt (then fell off several feet later)! Unfortunately that was the end of my session but I’ll be hitting the ATBShop kicker with a bit more confidence next time.

As with all sports, practice makes perfect & I intend to keep hitting the kickers & eventually work my way up the slider! Check back soon for Session #4 in our Learning To Wakeboard series.

Loving the loaded poke setup one lucky customer received this week. Sunny days are here and sweet carves on the roads! Want a custom setup for any board get in touch. 🙂
#loadedboards
#longboardskate #orangatangwheels #paristrucks #summerskate #skateeverydamnday #atbshop #customboards ... See MoreSee Less

Who’s looking forward to paddle board season?! Last year we ran out of boards! Don’t let this happen to you this year. Buy a decent one from a shop who know lots about them. They are an investment so make sure you don’t waste money on something which should work well and last you years. ... See MoreSee Less

We have had some awesome loaded complete boards going out this week. This Loaded Icarus looks amazing in the sun this morning. Get ready for spring carving 🙂

Exciting stuff happened yesterday!!! ATBShop was interviewed by ITV News about Covid and reopening the shops and skate park. They’re unsure when the interview will air but it will be on the main news channel either today, Monday, Tuesday or Wednesday during the lunch and evening news. Let’s us know if you spot Diana 🙂 ... See MoreSee Less

Just to say thank you so much for our little treats. We love the board and it was kind of you to add the gifts