For those of you who have been keeping track of what we’ve been up to recently with a weekend of running a wakeboarding demo down the cable shortly followed by Saturday and Sunday down the beach at Westward Ho. You’ll know the word busy isn’t to be taken lightly.

We arrived in Appledore late Friday night just a five minute drive from Westward Ho! greeted by shimmering lights across the harbour mouth. With the wind stirring high above and a forecast to good to be true for the next day we hit the sack for the couple of days work ahead.

A 10am high tide start, we hooked up with the Liquid Force Team who had already began pumping up the kites on the green armed with a small army of kites, branding and a tent. Raising the flags and firing up the BBQ for breakfast we had a hour and a half window to get setup before shifting the kit onto the beach. During this time we where met with cross/ cross on shore winds ranging anywhere between 20 to 25knots exactly; as predicted with some decent sized swell to accompany it. This made us grateful to have brought the surf board!

When the time arrived when we could finally descend upon the beach. Ourselves alongside the LFK guys decorated the pebble ridge with up turned kites as they made their way up and over onto the sand marking our ground with flags and equipment. Onlookers observed to what could have only been the ATBShop & Liquid Force Demo Day taking over the beach. 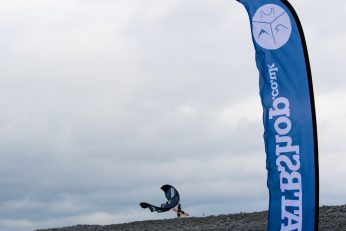 With the wind holding strong we where soon to realise the luck of Liquid Force jumping on board with the event as we quickly ran out of the smaller sized kites! Considering the conditions; the LF Wow 7, 9 and 10, along side the Envy 7, 9, Ozone Enduro 7, 9 and Flysurfer Boost 9 where the first to fly amongst the waves. It seemed the Slingshot T-Rex and Screamer directional surfboard didn’t stay laying on the sand for long either and was quickly taken to use!

With the tide receding quite some distance from the pebble ridge where we had setup, it was unfortunate that we could not get out for a ride in ourselves with such incredible conditions, having to look after all the equipment. However it just so happened that we had packed a mountain board to which Westward Ho!, known for its huge amounts of open space, is one of our top favoured kite land boarding spots in the UK.

Alongside the LF WOW, this made for a pretty ideal compromise blasting across the sand to and from where we had setup!

With more and more people taking interest in ourselves and Liquid Force with a simple chat over riding styles, disciplines and what they look for from a kite. We where sending them off across the sand with an all new setup to see them return later on raving with excitement.

As the first day drew to a close we left satisfied knowing those who had tried out some new kit where more than happy with their sessions! So we packed up, said our goodbyes to the LFK guys and headed off to camp out for the night.

With a high tide at 11:49 we had enough time to get setup with the LFK guys and go for a quick surf before there was enough space to get on to the beach. It’s mornings like this; sun, wind and swell that make you really appreciate the sport and the other sports that kitesurfing was developed from.

Shortly after 1.30 we began migrating on to the beach and raising the flags to let people know where back. Again another outstanding effort from the LFK guys having had their variety of kites, including the Solo, Envy, HiFiX and the weekends most popular kite for the surf, the mighty Wow.

With the expected Sunday traffic on the beach after an astonishing 25 knots forecast both ourselves and LFK had people queuing for the smaller sized kites. The 6.5 Solo, 7 Envy, 7 and 9 Wow alongside our 7, 9 Enduro and 9 Boost where the first to be up and flying.

Everyone managed to get out for a ride on the Sunday with such an awesome variety of kites and boards to choose from. Even the land board saw its fair share of use!

The wind continued to get progressively stronger throughout the day and yet all the kites remained on the water boasting high end wind diversity throughout the range. Ozone, Liquid Force, Flysurfer and Slingshot would have been proud!

Robin Snugs and Liquid Force team rider Craig Smith set the bar on the water by flying high and looping the kite like a machine, a level of riding that can only be fuelled by quality equipment!

As the final day of the ATBShop and Liquid Force Kiteboarding demo drew to a close, both ourselves and the LFK guys and those trying out all the gear came back exhausted from a long days shredding. With a massive thank you to Liquid Force kiteboarding for jumping onboard with the demo day, we feel as if we have accomplished what we wanted to do and with enough luck to have done so in the most ideal conditions; to show everyone the level of technology and performance that the brands of 2016 can offer!

Stay tuned for more upcoming demo days on our FACEBOOK page, or join our KITESURFERS PAGE by clicking HERE.

@mizulife bottles with awesome new @atbshop branding are now available in store now and on line very soon. They'll make a wonderful Christmas present for anyone who likes to think of the environment, loves @mizulife bottles and is a fan of ATBShop.

Comment below what your fav colour is and why you should win one. Then on the 31st of October we shall choose a winner. Good luck everyone. 😘