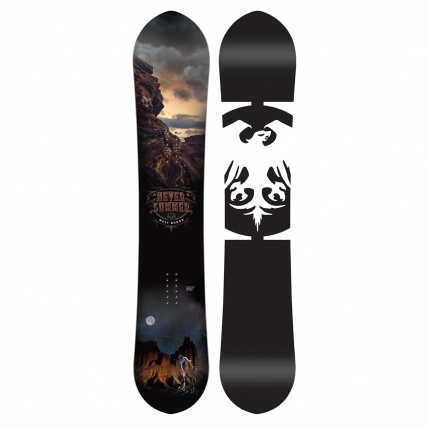 All of the finest technologies come together to make one outstanding, all mountain snowboard. The West Bound is one of the finest board developments we have seen at ATBShop!

RRP £599.00 £379.95
Please select an option
In Stock & available for UK next day delivery
Oops, we are currently out of stock. Get notified when this item is available again

This board is for the riders that like to push their abilities to another level, for the riders that cant take no for an answer, for the riders where "that will do" is not enough! The Never Summer West Bound is for the die hard progressive rider that likes to go off the beaten track yet likes to set the bar when it comes to using and abusing the whole mountain. With Never Summers fastest base and a mid to firm flex rating for a higher level of light speed, response and power  the West Bound is not for the feint of heart and delivers exceptional performance that can only be found in a Never Summer construction. Now with a new Shaper Series tip, tail and bend profiling; all mountain domination has never been such eye watering fun!

The West Bound (having been renamed from the West) features an all new Fusion Rocker Camber profiling found in Never Summers Shaper Series snowboards. This profiling offers an unbeatable edge hold, a powerful edge to edge feel generated from the tail end of the board while its rockered nose offers a much more surfy feel in the pow pow. Boasting this dynamic all mountain profiling, inside the West Bound we have Carbon VXR laminate technology positioned on the tip and tail of the board offering an ideal layup for energy store and release as well as enhanced energy transfer from edge to edge. This also provides superior torsional control while a Recluse Web Carbon Layup offers additional reinforcement and support under the bindings.

Utilising Never Summers Superlight Wood Core designed to be the lightest yet most durable core on the market which has been tailored to flex perfection, NS have layered the core with an RDS 2 Damping System and Elastomeric Underfoot Stabilisers to eradicate chatter, shocks and vibrations to give you that exceptionally smooth ride only found with a Never Summer Snowboard. Offering some of the best snowboard bases on the market Never Summers Durasurf XT Sintered 5501 base is the very best that they have offer which is more than enough to keep well ahead of your mates, smash through the flats and send you in to light speed on the steeps. Its the best base we have ridden here at ATBShop and it simply cant be beaten! For all the euro carvers out there nothing beats a Vario Power Grip Side Cut which sticks to the snow even in the iciest of conditions!

Ultimately this board features all the latest ground breaking snowboard technology with no detail left un-turned, tweaked and straightened out to perfection. The Never Summer West Bound drives its very own legacy with exceptional all mountain performance that will surf the pow like a dream of surfing clouds. You wouldn't just be buying a new board, you would be opening up a future of endless possibilities!